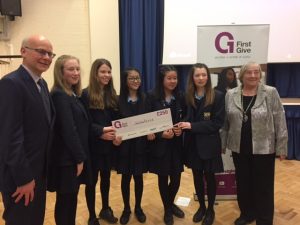 In November last year we were approached by 5 girls from St Albans School for Girls who were participating in a charity event called ‘First Give Building a Culture of Giving’.  They were given the chance to win £1,000, given from sponsors, for a charity of their choice. First Give focuses on gaining awareness for local charities and encouraging young people to get involved with them.  The five girls (Katie, Alice, Rebecca, Emily and Sophie picured above with Robin Cattle and Cllr Gill Clarke, Deputy Mayor of St Albans) chose JumbulanceTrust and set about putting together a presentation.  7 groups made it through to the final which was held on Tuesday evening, 22 February at St Albans School, with a panel of 5 judges.  The girls had worked hard and Katie even wrote her own song to accompany their powerpoint presentation. We are pleased to announce that they were runners up and presented with a cheque for £250 which they have specifically requested be used towards our new Jumbulance which will be ready for the road in 2018!  Thank you and very well done girls!

Volunteering with us is a truly rewarding experience

Find out more
Our destinations

Vist a variety of destinations across UK and Europe